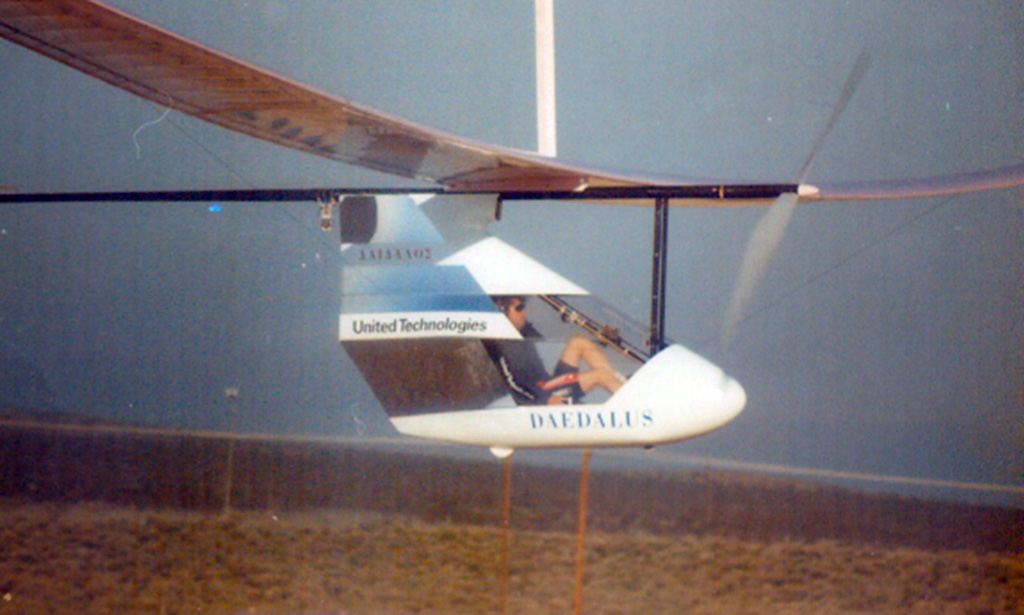 Kanellos Kanellopoulos was born in Vrachnika, Achaea on March 25th, 1957. He is a cycling champion and is considered as one of the best ever Greek cyclists. He was an athlete of the Patras Cycling Club from 1973 to 1993.

He is a 15-times Greek Champion on the road and track, 16 times Balkans Champion on road and track , team and individual (2 gold) and 2nd place at the Mediterranean Games in Casablanca. He has numerous victories in smaller competitions. He was a member of Hellas National Team from 1977 to 1993 with 530 participations. He represented Greece at the Los Angeles Olympics in 1984 with Elias Kelesidis in the 190.2 km Road Race but had to abandon due to a fall.

He was chosen as one of the five cyclists to make an experimental flight to demonstrate the potential of a human-powered aircraft. Thus on April 23, 1988 he flew a pedal-powered plane, the “Daedalus”, with a weight of 32 kilograms, starting from Heraklion, flying over the Aegean Sea, covering the route from the northern coasts of Crete to Thira (119 Km) in 3 hours and 54 minutes, This performance created a new world record of distance and flight duration with a plane powered by muscle, something similar to the wings used by the mythical Daedalus and Icarus. The event was recorded in the Guinness Book of Records.

What stays with you after so many years involvement with cycling?

“Of course I have many beautiful memoriess from cycling. Many victories, appearances in Greece and Europe with the Patras Cycling Club and the Hellas National Team. I didn’t make so many friends. It was such intense training and for me there was not so much fun. I would say that because of the many hours of training, I had very close contact with my teammates. We were ate together and we were mainly discussing the races. “

What were the best moments of your competition years?

“There were so many, I would not like to choose some as better than the others. I have no complaints about my career. I achieved enough. “

What memories do you have about races in Rhodes?

“The truth is that when the Rhodian cyclists raced, the stadium was full. The crowd was always very warm. They knew who we were and cheered us by name. A beautiful time with beautiful moments and memories. I also want to say that in Rhodes and in particular in Kalythies I did my military service. Last May I came to the island for a reunion event. “

Who would you like to see and meet again at Historica after so many years?

“It’s a good opportunity for all of us to get together again. Most of us have lost touch for many years and it will be nice to meet again on the beautiful island of Rhodes “.

What is your view of Historica?

“Even though Rhodes is not as accessible as, say, Athens or Thessaloniki, I think it is a great idea to organize something like this. A cycling reunion is a beautiful thing and reminds us of the past. “

This website uses cookies to improve your experience while you navigate through the website. Out of these, the cookies that are categorized as necessary are stored on your browser as they are essential for the working of basic functionalities of the website. We also use third-party cookies that help us analyze and understand how you use this website. These cookies will be stored in your browser only with your consent. You also have the option to opt-out of these cookies. But opting out of some of these cookies may affect your browsing experience.
Necessary Always Enabled
Necessary cookies are absolutely essential for the website to function properly. This category only includes cookies that ensures basic functionalities and security features of the website. These cookies do not store any personal information.
Non-necessary
Any cookies that may not be particularly necessary for the website to function and is used specifically to collect user personal data via analytics, ads, other embedded contents are termed as non-necessary cookies. It is mandatory to procure user consent prior to running these cookies on your website.
SAVE & ACCEPT